The history of English antique furniture styles and periods in broad terms mirrors England’s history generally. An island nation, somewhat cut off from the main currents of thought and design on the continental mainland by geography and historical circumstance, over time takes in greater influences from abroad both in human and intellectual form which produces fusions and resolvings of styles that are then carried across the world. 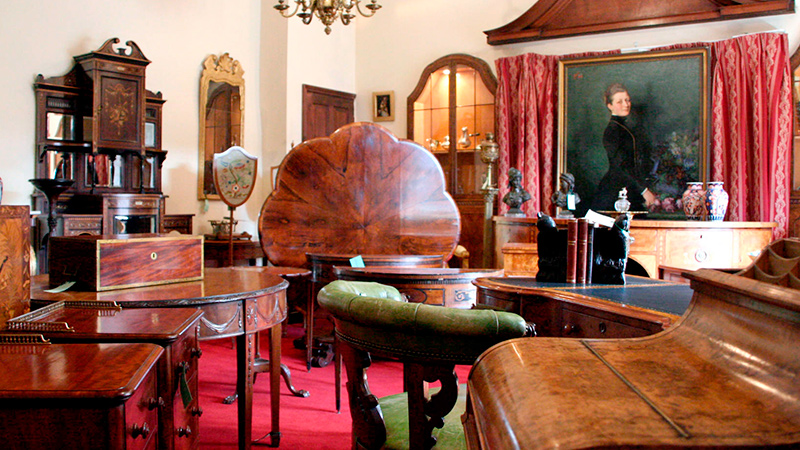 Tudor
The Tudor period in English history begins with the ascent to the throne of King Henry VII in 1485 and ends with the crowning of Queen Elizabeth I, this event signifying the end of the Middle Ages in Britain and supposedly the historic beginning of the English Renaissance.

Tudor Furniture
Early Tudor furniture was very similar to the Medieval furniture and Gothic furniture periods preceding it. Ordinary people had very few furniture possessions and even in the large houses of the wealthy there would be only beds, benches, stools, tables, and coffers. Chairs were reserved for the owner of homes when presiding over meals in the hall – their guests made do with joint stools.

Tudor Antiques
Tudor antiques are exceptionally rare and are mostly found in museums and great houses with some highly expensive furniture appearing in the market place.

Elizabethan
Queen Elizabeth I belonged to the Tudor line of English royalty and played such an important role in her young country’s fortunes that her time is signified by her name rather than that of her father, King Henry VIII. Elizabeth Tudor came to the throne in 1558 and reigned until 1603.

At the end of Elizabeth’s time a highly decorative and architectural style had become established among wealthy and fashionable persons of the period derived from the Flemish Renaissance, but applied with perhaps less knowledgeable artistry than it had obtained on the continent.

Elizabethan Antiques
Elizabethan antiques are exceptionally rare and are mostly found in museums and great houses with some highly expensive furniture appearing in the market place.

Jacobean
The Jacobean era is named after King James I who ruled from 1603 until 1625. James 1 belonged to the Stuart family as did his son and successor King Charles I, reigning from 1625 until 1649.

Charles II – Restoration/Carolean Period
Charles II ascended to the throne in 1660 bringing to an end England’s republic and the return of monarchy.

Charles II – Restoration/Carolean Furniture
Charles II and his court had spent years in exile in the fashionable centres of France and Holland and had learnt to admire the styles of furniture. On their return to their homeland they transplanted French and Dutch baroque tastes to London and English furniture. Elaborate furniture of the European continent, particularly that belonging to the Louis XIV Baroque style, spread into the homes of wealthy Londoners. The pieces were veneered, gilded, marquetry-inlaid and lacquered. However, in provincial areas of England, country furniture continued being made of oak in the semi-Gothic Jacobean styles.

Charles II Antiques
Charles II furniture was made in great variety and quantity. It can be found today and remains popular in the market place.

William and Mary
William and Queen Mary ruled England from 1688 to 1702. William of Orange was Dutch and a great deal of Dutch influences entered English furniture.

William and Mary Furniture
William and Mary furniture was very decorative. Large numbers of Dutch cabinet makers and craftsmen came to England; they were regarded as very skilful in furniture design and decoration which brought England closer to the major movements of furniture in Europe. There was much use of ornate decorative effects on surfaces such as veneering, parquetry, lacquer and marquetry, with walnut now the timber of choice for the cabinet maker.

Queen Anne
Queen Anne of England reigned from 1702 – 1714 and in this age English baroque furniture hit the peak of its history.

Queen Anne Furniture
Queen Anne furniture was the start of the English movement of self-styled furniture which competed happily alongside that of our French and Dutch neighbours. English furniture started to become elegant, well proportioned and decorated. Walnut was still the main timber used. The claw and ball foot made its appearance in English furniture design; lacquered work was very decorative and elaborate also during this period.

Queen Anne Antiques
Queen Anne pieces have survived in some number, but still demand a high price when found in the market place.

Georgian
The Kings George I, II and III span from 1714 – 1811 and together their reigns are known as the Georgian period.

Georgian furniture
The early Georgian period kept with the styles that had come from the Queen Anne period and continued in popularity, but underwent modifications of its own.

The most important change that occurred was the replacement of walnut by mahogany. Mahogany had first been observed on a voyage in 1595 by the carpenter on board Sir Walter Raleigh’s ship. It was admired as one of the many wonders of the Indies and on very rare occasions used. In the early/mid part of the 18th century, mahogany rapidly won favour among cabinet makers due to it being very strong, long lasting and having close grained wood; the rich dark red colour was well sought after. The lifting of taxes on mahogany imports by Prime Minister Sir Robert Walpole in the mid-18th century was the start of the mahogany revolution.

Carving of the highest quality was used in seating furniture, a carved eagles’s head or sometimes scroll form was favoured for the termination of the arms. Furniture was ornate, with lavish carving and golden ornamentation; it was sculpture like and could just as easily have been carved out of stone as of wood. Motifs used were the lion mask, the satyr or human mask, the acanthus, the claw and ball foot, the scroll foot and the paw foot. It was the start of fantastic British furniture. The Palladian-style furniture made much use of elaborate pediments, masks and sphinxes. As the Georgian period progressed, Britain had a wealthier and more knowledgeable lower upper class that wanted the trimmings that came with wealth. This is the real boom for the English Cabinetmaker.

The age of the great designers had started. Chippendale, Adam, Hepplewhite and Sheraton helped create masterpieces that are being recreated up to the present day. They sold publications of their designs and the first of Chippendale’s sold for the large sum of £2. 8s.

As the Georgian period progressed so did the furniture. It formed a distinct contrast with that of the earlier period as a new simplicity and severity of form was sought. In general, curved lines became straight, ornament was abundant and sometimes intricate, but of a less robust character and was usually painted inlaid or applied in low relief.

Georgian Antiques
Georgian antiques have survived in large numbers due to the quality of the craftsmanship and timbers used, they have mellowed with age and matured with beauty and will sit happily in the smallest home to largest mansion and will be admired by all.

Regency
Regency is a term used to describe a style in English decoration and furniture of which successive phases extended over rather more than the first quarter of the 19th century. The term is loosely applied, the period to which it refers does not, in fact, coincide with that of George, Prince of Wales (1811 – 1820) nor does the style reflect the personal tasted of the Prince Regent during those years.

Regency Furniture
Regency furniture took one step further the neoclassical antique style seen in Robert Adam Furniture and his descendants in later Georgian times. While previously the antiques of the ancient civilizations of Greece and Rome were a source of inspiration for furniture designers, in the Regency period attempts were made to make actual copies of ancient furniture, and there was a new interest in the heritage of Egyptian furniture. Regency-style furniture has plain, slender, elegant lines and avoids shapes and curves for surfaces. The use of carving and elaborate forms of decoration and ornament-like marquetry declined. There is a great deal of brass work employed and much use of rosewood and zebrawood, because they allowed striking use of colour in veneers, alongside mahogany, which was still the wood of choice. Woodworking machines were adopted to cut costs of manufacture, French polishing came to be used extensively. During the end of the Regency period, Gothic and Chinese styles underwent a revival.

Regency Antiques
As with Georgian antiques, Regency pieces have survived in large numbers due to the quality of the craftsmanship and timbers used. They have mellowed with age and matured with beauty and will sit happily in the smallest home to largest mansion to be admired by all.

Victorian
Years before Victoria became Queen, English society was becoming Victorian, reaction, political unrest, the Evangelical Revival all played their part in the change, but a major cause was the growing importance of the middle classes. In 1832 the Reform Bill was passed, setting the middle classes on the road to political power. From now on their standards and values were to be a major influence.

Victorian Furniture
For the first time, ordinary comfort is becoming the determining factor in the design and making of furniture. With a great increase in the numbers of middle class homes more furniture was needed and it was made in an abundance of styles, but again for the first time in history it was with the desires of the consumer. Furniture was serious, it was more imposing, rounded, with ample ornament, decoration, curving and gloss, turned legs replaced the straight leg of earlier periods. Furniture was mainly made in mahogany and rosewood with the revival of oak (Victorian Gothic) and lacquered furniture. This was the start of the furniture manufacturing industry employing thousands and thousands of people.

Victorian Antiques
Available in many different forms and sizes, affordable for everyone.

Edwardian Furniture
Furniture makers in the Edwardian period realised more than ever the possibility of production on a larger scale. Furniture was reproduced from earlier pieces but often incorporating styles from different periods. Furniture became smaller for the smaller home, mahogany was still the main timber of choice and back came the decorative inlays that tended not to be used in the Victorian times, we find the Adams inlaid swags, the carved leg, the satinwood banding, and the brass mounts. Furniture became affordable.

Edwardian Antiques
Very many pieces are available in the market, though some are not of such high quality. The Edwardian antique is of solid timber and is well priced compared with today’s mass manufactured pieces.